Why is the MSW management in Italy a difficult issue?

The total production of MSW (Municipal Solid Waste) in Italy in 2016 was around 30 million tons, with a production of around 500 kilos per capita. Unsorted waste production is decreasing due to increasing of the separated collection which reached 52.5 % in 2016, but with a large spread between the northern and the southern regions (65 % respectively 37 %). 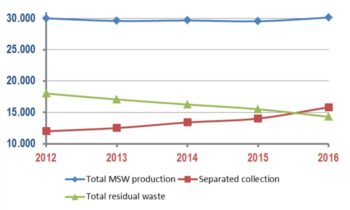 In the same year, incineration concerned 5.4 million tons of MSW, including Refuse Derived Fuels, with a share of 18 % of the total production of MSW. This is the result of an uneven distribution of the incineration plants which are also decreased (at least in number) in the last years.

The figure below shows the actual MSW incinerated per capita (in kilos). This means that in many regions in central and south Italy there is no possibility to divert MSW from landfilling. In principle, this can be obtained by increasing the separated collection, by increasing the number of incineration plants or by sending the unsorted MSW to incineration plants localized in other regions or abroad. 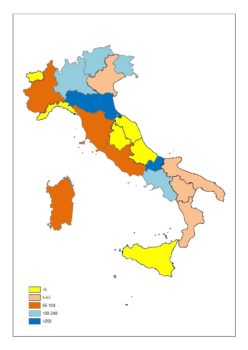 The result is a “migration” of waste from regions where there is a limited capacity of incineration (mainly south and central Italy) to regions with a higher capacity or even an overcapacity (north of Italy). Being the MSW management regulated at regional level, this often causes problems of public acceptance among people living in a region with higher incineration capacity.

Notwithstanding this situation, in 2016 the direct export of MSW from Italy to other European countries was around 1 % of the total production.

Interested in BECCUS? Then you have to check our last report
February 4, 2023

New publication: Case study about Valorisation of biowaste in the United States
June 16, 2022