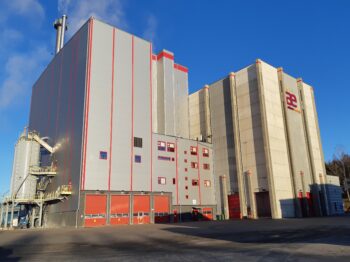 In order to reduce its dependence on oil and electric power, Nordic Paper decided to start their own energy production with municipal waste as fuel. The reason was mainly economic in a time with volatile energy prices around 2005–2008. For this reason, Åmotfors Energi was founded with the main purpose to provide the paper mill, owned by Nordic Paper, with steam. The steam is used in the drying of the wet paper as a last step of the process. After a thorough investigation and feasibility study the best alternative was to build a custom-made combined heat and power waste-to-energy plant.

The main reason for choosing waste as fuel was foremost economical. As a spin-off the plant also has capacity to deliver district heating to the nearby village of Åmotfors. The waste fuels are mainly municipal solid waste from nearby municipalities in Sweden and Norway. The carbon dioxide emissions are nearly the same as before the waste-to-energy plant was built with the difference that the paper mill minimized its dependence on fossil oil and electric power. Beside the steam delivered, about half of the power consumption is covered by the power production from the CHP-plant. Over 95 % of the fossil carbon dioxide emissions originate from the content of fossil plastics in the waste fuel. Even though there was some initial criticism about the new plant during the application process, it is now fully accepted by the society. One lesson learned is that sufficient data should be gathered about the energy needs of the paper mill to fully understand the specification of the delivery. Also, to dare to think outside the box and to dare to take calculated risks.

Link to the case study: